By brettgreenwoodfoundation on April 19, 2013 in Uncategorized

On March 29th, the American Heart Association of Johnson County honored Brett with the Hawkeye Heart Hero Award at their annual Heart Gala held at Kinnick Stadium. While Brett was not able to attend the Heart Gala, Pat Angerer graciously stepped up and spoke on Brett’s behalf. This is the text of his speech:

“Just want to start off by saying that this truly is a wonderful event and a lot of great things come out of this gala. The American Heart Association, each year, gives Millions in research funding in Johnson County.  Last year alone, they gave $3.2 Million.  It is research like that that has enabled Brett to receive the very best treatment (from the training of doctors and nurses, to treatments, to rehabilitation).  They are also aggressively focusing their efforts on diagnosis of heart defects in newborns…something that may have an effect on the young people that are dying on the field/court, etc. from undiagnosed heart defects.   Every penny raised in Johnson County, stays in Johnson County.

Brett’s Story: Brett had been home in Bettendorf training at Pleasant Valley HS since he was released by the Pittsburgh Steelers after making it through to the final cuts.  Brett never really wanting attention would always workout at Pleasant Valley at 9 o’clock at night when nobody was around. Brett was asked to speak to the Pleasant Valley football team for their home opener so he decided to head in earlier on September 9th 2011.  This was when Brett suffered from a heart arrhythmia that caused his heart to speed up and then stop.  Fortunately, trainers and football staff were around and were able to use an AED (automated external defibrillator) to essentially save his life. If that wasn’t at the high school Brett probably wouldn’t be alive today.  Brett then was transferred to a local hospital and finally to Iowa City where he lay in a coma for 27 days.

In Brett fashion, when he came out of the coma he greeted the nurse with a, “good morning.” But it was still an uphill battle.  Due to Brett’s heart stopping for so long he suffered from oxygen deprivation to his brain, which can cause loss of motor skills, cognitive, behavioral and personality changes. And his vision and speech suffered as well.  This was the start of the uphill battle that Brett attacked just like he attacked everything in life. He was moved to “On with Life”, in Ankeny, IA , a rehabilitation center for people with similar brain injuries.  He continued to get better and was moved to NeuroRestorative, in Carbondale, IL, where he continued his treatment and continued his fight to normalcy.  He improved greatly and honorable fighting the whole way and I’m sure swearing at the nurses and whoever would listen at times.  He was in a fight and he knew it. He battled all of that and improved, now he does out-patient rehab at Genesis in Bettendorf, where he works and works for hours a day.  Getting a little better everyday, chipping at the rock just like I had the pleasure to witness for four years at the University of Iowa. Talking to his father last night and Christina and they kept reiterating how far he has come.  I’m sure it hasn’t been the easiest thing for them to deal with and go through but their strengths rely in each other and I know the reason why Brett has been doing so well and accomplishing so much everyday is because he has the best family and support system a person could ask for.

I got the privilege to see Brett last night for the first time since the incident took place 18 months ago.  I couldn’t help but leave motivated and lifted up.  The brightness and strength he brings is unmatched in any man.  Obviously, there is still work to be done.  His short-term memory is still in need of work but the old squirrelly laughing Brett who used to prank people in the locker room and get them destroying each other’s things for weeks before they realized it was him all along laughing the whole way, IS STILL THERE.  The same determined Brett who walked on at the University of Iowa became a four year starter, worked his way on scholarship, was honored with countless awards and all big ten mentions, made sure me and Edds’ dumbasses were lined up correctly and were in the right coverage every play, was the heart, soul and leader of the 2010 Orange Bowl champion defense, battled his way to the final cuts of the Pittsburgh Steelers in his rookie season, IS STILL THERE.  The same flawless man with a big heart who I emulated when I needed to make changes in my personal and athletic life, the man I want my son to grow and be and the man I would be proud if my daughter married, IS STILL THERE.  The man who battled out of a coma, got to his feet, walked out the damn rehab place into his house, smiling and fighting the whole way, the man who continues to work his way to perfection IS STILL THERE.

In modest Brett fashion when he was told he was getting honored tonight he asked, “Why?”. The same Brett who has no clue how truly bad ass and inspirational he is to so many people IS STILL THERE and will always be the most flawless man I know.

It has been a long road for Brett and his family and Brett has come a long way and improved tremendously.  I know they appreciate all of the support and well wishes.

I have received a lot of honors and awards in my day playing football, and speaking on behalf of Brett is by far the highest honor I have received.  I’m grateful for the Greenwood family and to Christina for allowing me and trusting me enough to speak about Brett; he is one of the best men I know.  Thank you all.”

Brett’s story could not have been told any better than how Pat described this journey. While Brett continues to improve, there are still many unknowns ahead of us all, but like Pat said, ‘the man who continues to work his way to perfection is still there’. Thank you everyone for the continued support of Brett and the family. I know Brett is humble and doesn’t really believe he is an inspiration to be honored here, but he also recognizes the value and importance of the American Heart Association and the work they do in Johnson County.  And in time, Brett will join us at events like this. 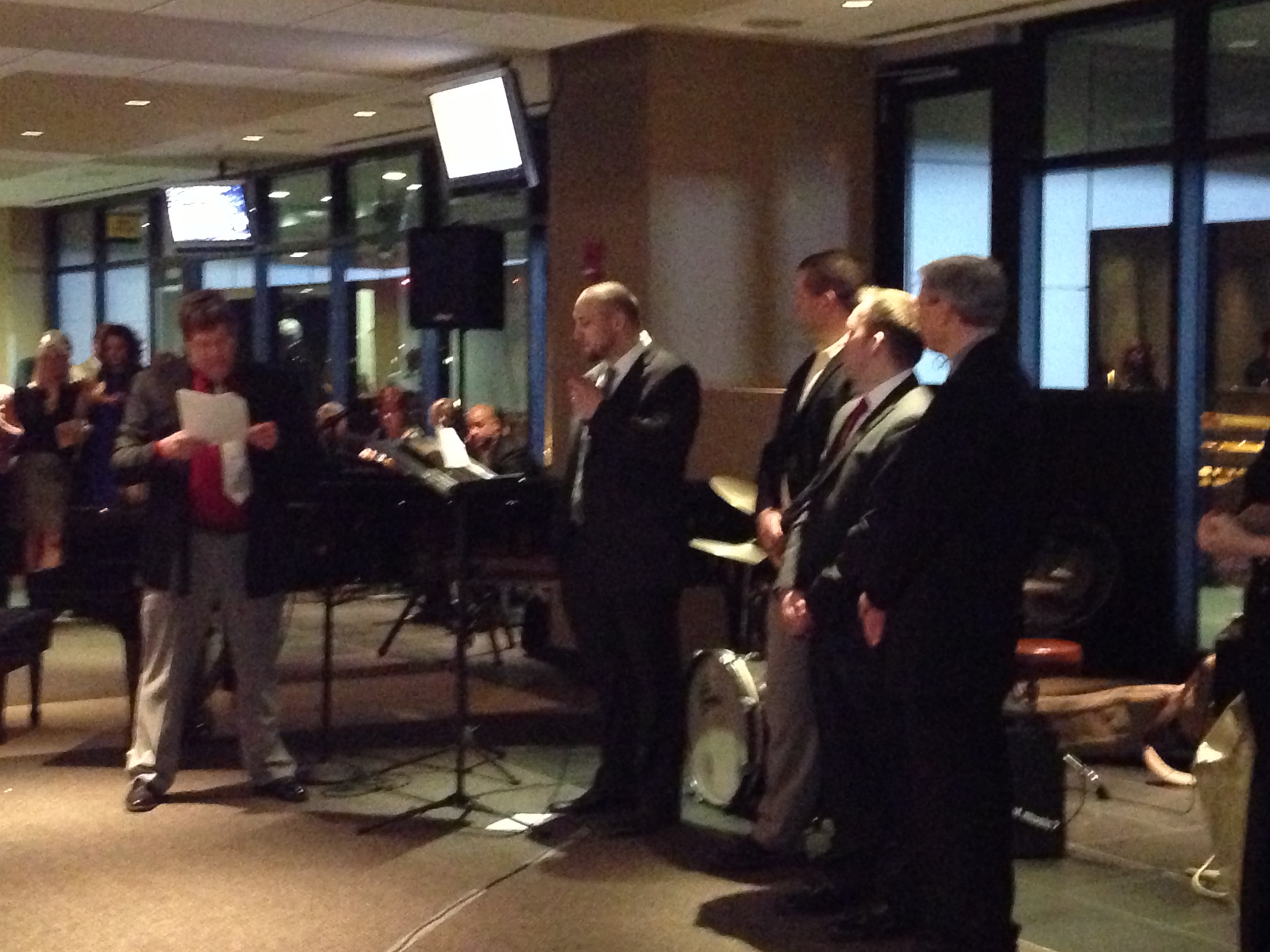 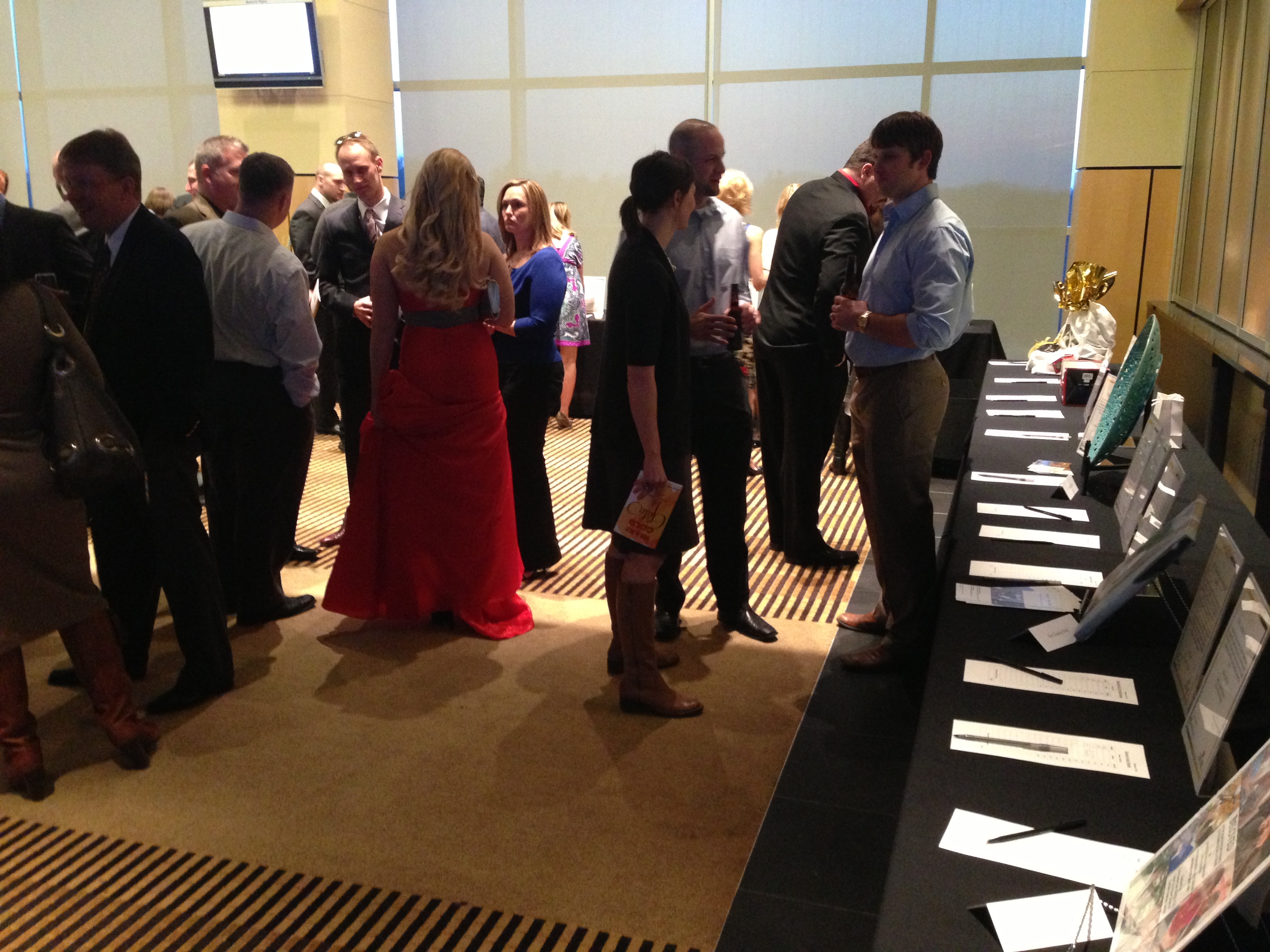 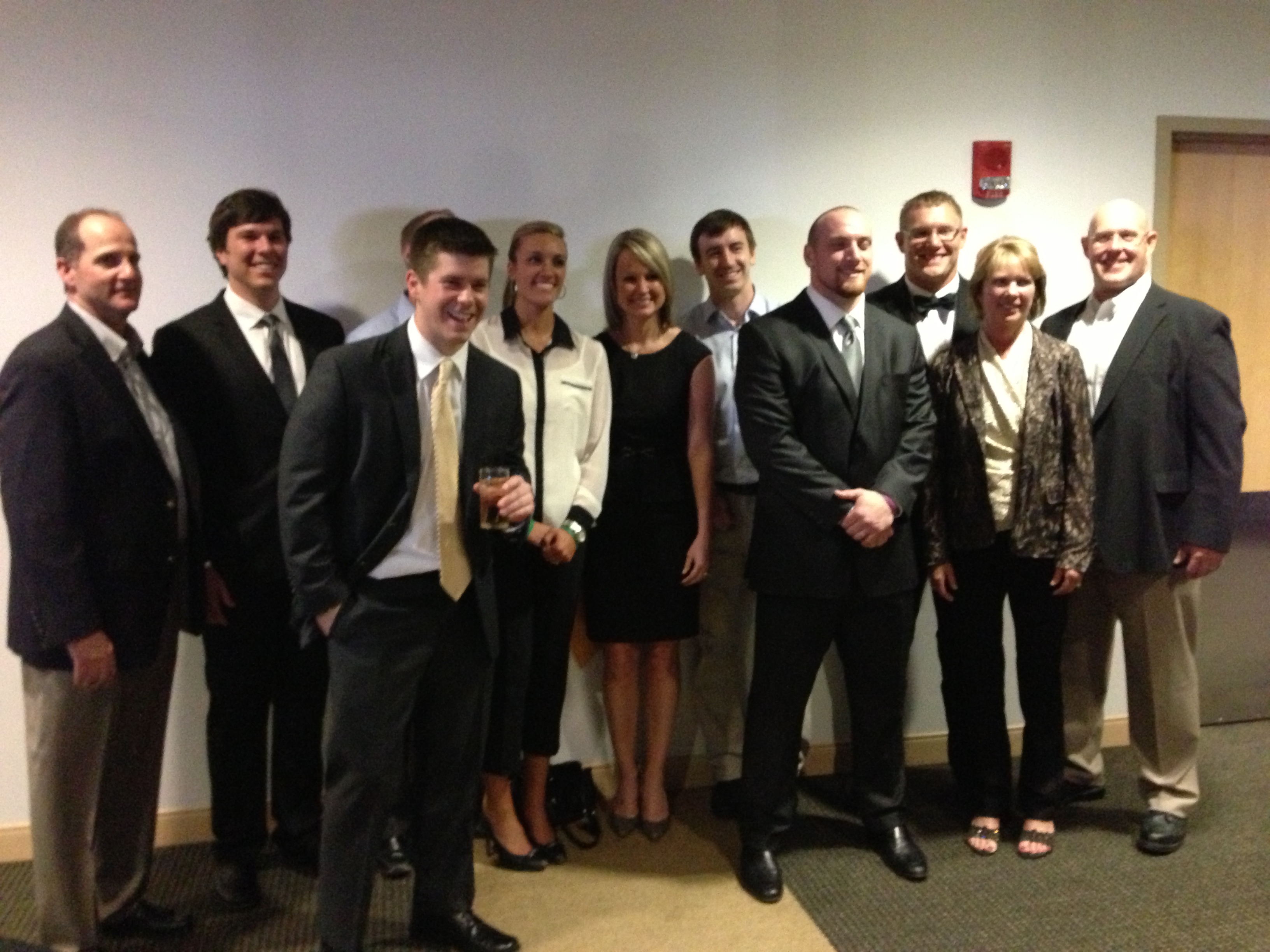 A few former Hawkeye teammates, Coach Phil Parker, Coach Chris Doyle and members of the Greenwood family after the banquet 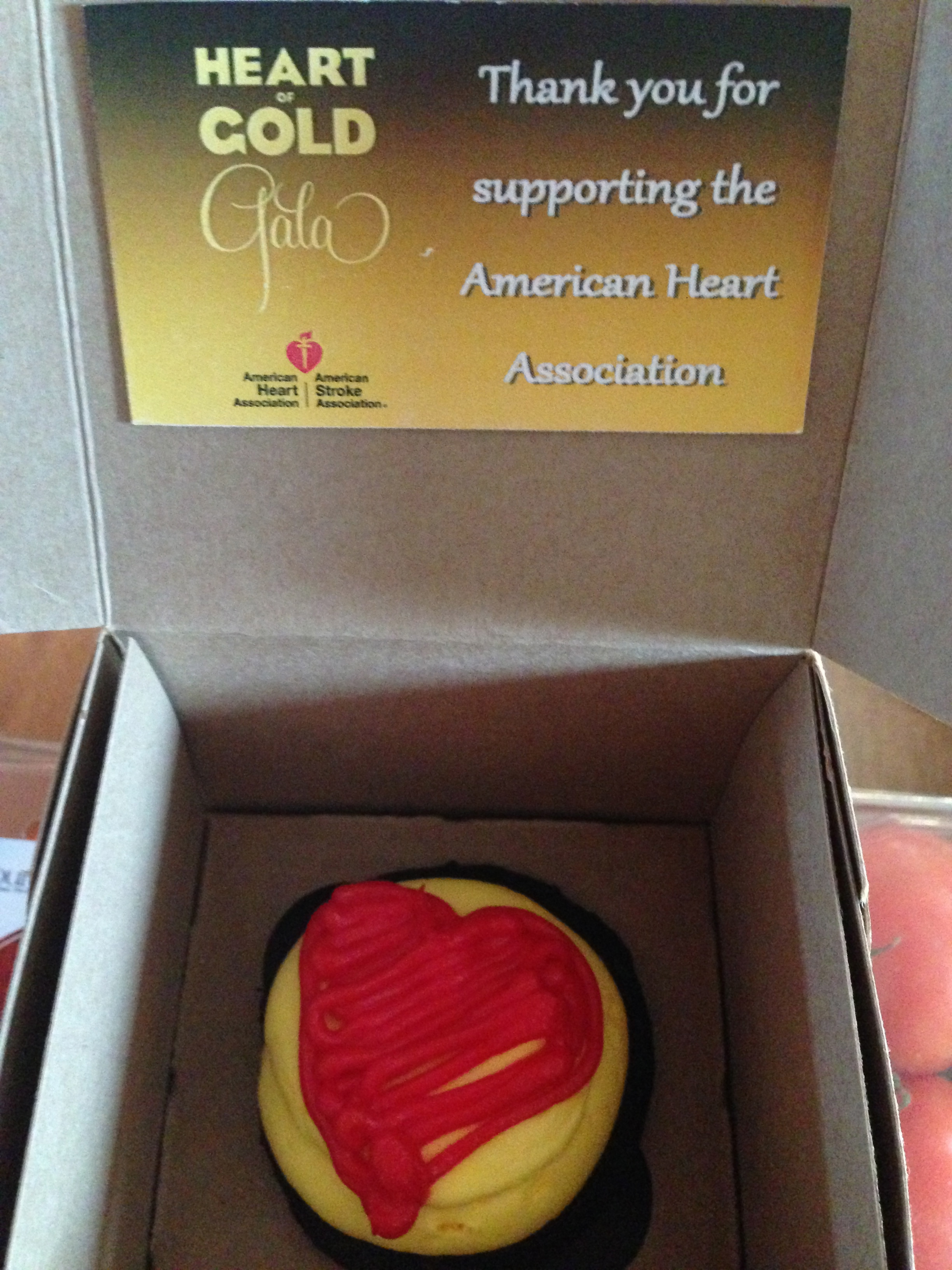 A ‘Thank You’ courtesy of Molly’s Cupcakes in Iowa City 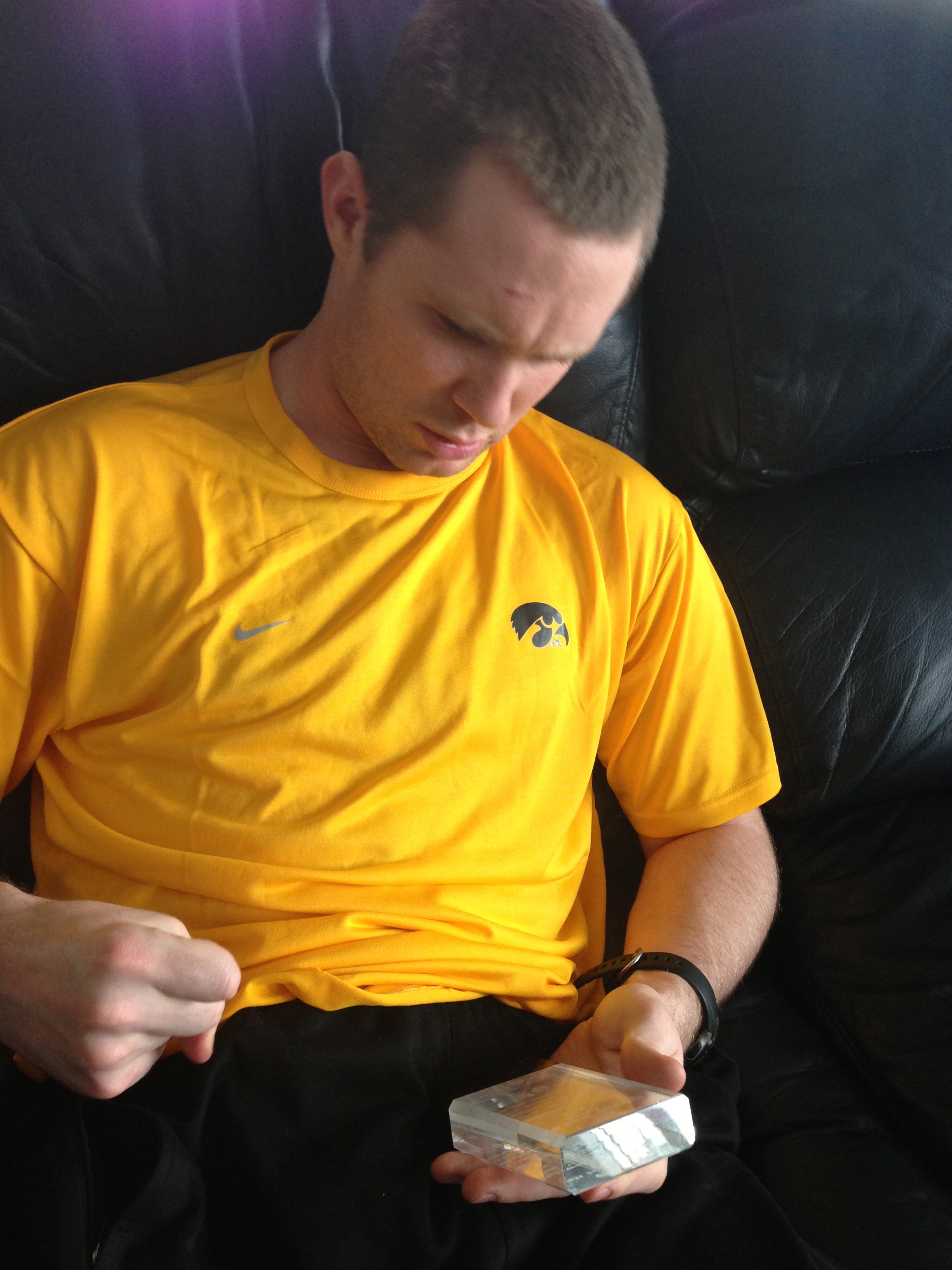 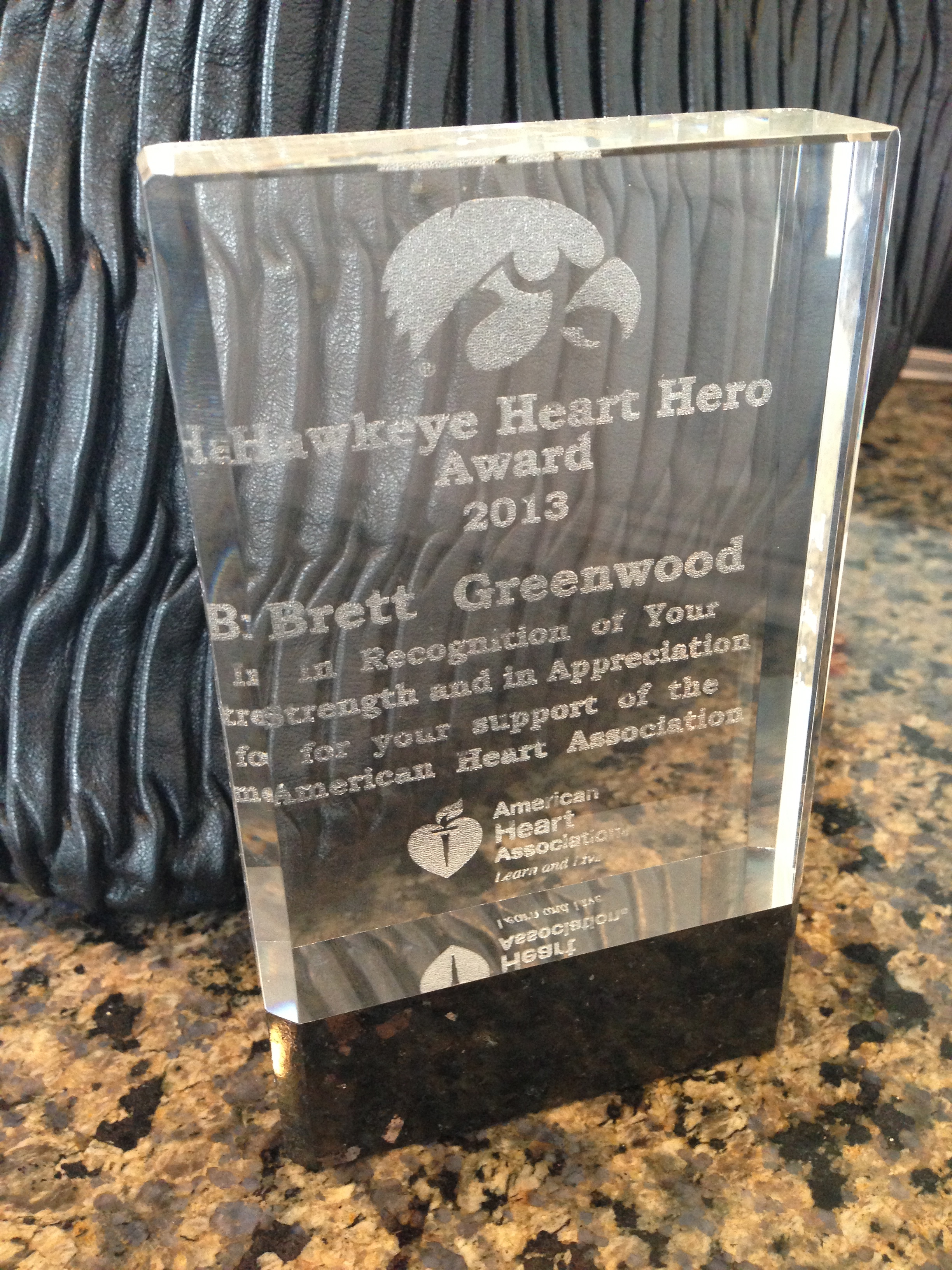 Run 3 for 30
A Happy Fourth of July weekend!