By brettgreenwoodfoundation on April 13, 2012 in Uncategorized 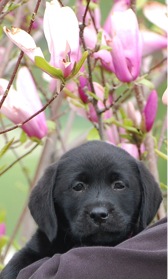 Steele Magnolia, a 12.6 pound pure black lab puppy, has been a long time coming—three years as a matter of fact. Brett and I began the puppy fund from some leftover pennies found in Brett’s car. The puppy fund was created out of mere principle—I was not going to throw away seven pennies.

Three years later, the puppy fund change was turned in to the bank for a total of $558.84. 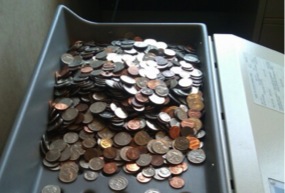 The days in the hospital are all a little blurry, but at one point both dads reached in their pockets and pulled out change – it was the first outside donation to the puppy fund. People who were visiting started asking about the fund. Next came a humble Styrofoam cup scribbled with the words “puppy fund” that sat among the Hawkeye and Steelers memorabilia on Brett’s shelf. And that’s when the dramatic growth of the puppy fund happened – even Coach Ferentz and Brett’s world renowned Neurologist, Dr. Adams, pulled out some change for the puppy fund.

Once Brett left the hospital and moved to On With Life the puppy fund grew more— one night he even asked a CNA for some change! Brett said as he held out the blue piggy bank, “we accept donations,” very sure she would willingly donate—and she did. Later that evening more people walked through Brett’s room dropping change in the piggy bank. 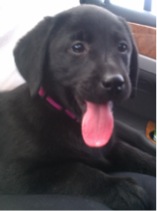 At the time, the donations seemed like a simple and kind gesture, but looking back—it was way more than that. People wanted to know what they could do to help. Flowers, cards and food were always around—but the puppy fund represented something else. It seemed to consistently bring a smile.

The puppy fund signified a future where Brett was healthy enough to enjoy the love and companionship of a puppy, and the joys of running alongside her and throwing the ball for endless hours of fetch. And now she’s here. 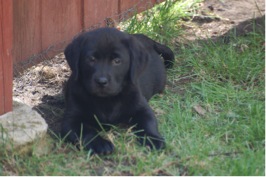 Steele Magnolia is from the champion line of Briarwood Labradors just outside of Des Moines, IA. While Steele is only 11 weeks old, everyone has big plans for her future. She is incredibly smart and captures the hearts of everyone she meets—especially Brett!

It was love at first sight, for both of them. 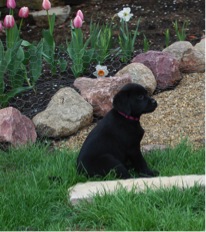